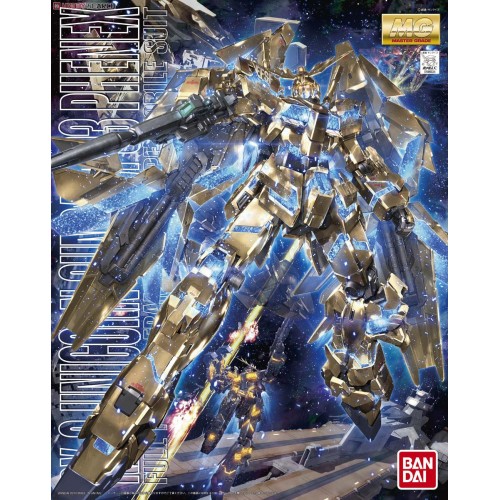 - Unicorn Unit 3 «Fenekusu» shining gold
- Unit 3 Unicorn Gundam, which is set in the new Gundam Front Tokyo [DOME-G] for the MG and
Appeared to become. Psycho frame reproduced in clear plastic armor of gold and plated parts,.
And can be turned to Destroyed mode from Unicorn mode of course. I can be mounted on the back
In addition to the Armed armor DE, various armed is also included. I differ from Unit 1 of the white, also Unit 2 of black,
I served on the Gundam Unicorn Gundam a New.
- Angle characteristic of the head reproduced in the new shape. In addition, for displays and movable for actions
Fixed is attached, can be selected.
- Completely reproduce the transformation mechanism to Destroy Mode and the Unicorn mode. The deployment of armor,
In Destroy Mode, the overall height and expanding from Unicorn mode, and can be turned in as set.
- Psycho frame of blue Fenekusu own reproduced in clear plastic. Destroy mode
Psycho frame of clear plastic made from exposed armor. I reproduce the texture along with the armor parts of gold.
- Beam Magnum is Omo-hei instrumentation is attached. In addition, bazooka and shield normal also included, of armed
Can be changed.
- Armed armor DE expansion and contraction deployable. Psycho frame is exposed during deployment.
- It has been delivered to the preceding RX-0 Unicorn Gundam Unit 3 Fenekusu ... test
Unicorn Gundam gold was built on the basis of the full body of Psycho frame.