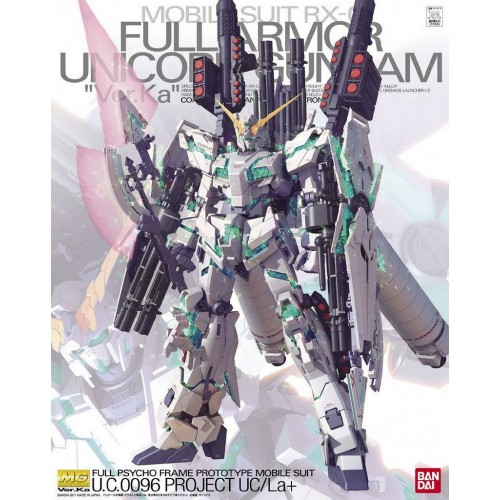 - Novel version Author: Dr. Harutoshi Fukui, mechanical designer: the cooperation of Mr. Katokihajime
Gundam Unicorn wears a new revival with Ver.Ka!!
- Novel version [Gundam UC] The Full Armor Gundam unicorn appeared in the late
I MG! Fukui said the author, a mechanical designer with the cooperation of Mr. Katoki, adding new weapons. A number of
Packed with gimmicks to reproduce the militants.
- Includes armed 27 + α! Beam rifle, bazooka, and hand grenades, armed supplied
All nine, 27 items + α. Equipped with all available weapons!
- Armed rich, can be fitted together. Beam rifle, hyper bazooka,
Grenade launcher, etc. You can even hand. In addition, hyper bazooka
Can be fitted to concentrate on other weapons.
- Hyper Beam Javelin Armed new design! New design based on the image of Mr. Fukui
Javelin was hyper beam. Exposure, such as the psycho-frame, with a large number of gimmick.
- Backpack equipped with arms for extra frame. Inset from the bottom of the backpack
Folding arm joint so crowded, you can hold firmly.
- Besides the shield left and right arms, the back is also equipped ships with a total of three pieces.
- Comes with a stand to support the huge back thrusters. In heavily armed, and well
Can be displayed.

( This is a machine translation. Please allow for possible misinterpretations in the text. )
Tools & Materials